The Parameters of Ecosystem Analysis

In communication and media research, the concept of a media/information “ecosystem” has been increasingly employed in recent years, no doubt due to the growing recognition of the networked nature of information in the digital age (Anderson, 2013; Napoli, Stonbely, Friedland, Glaisyer, & Breitbart, 2012). Ecological studies of media and communications systems go by many names, and have been performed by scholars in a range of disciplines – from science and technology researchers using Actor Network Theory, to sociologists who focus on the “field,” to computer scientists using graph theory. In some cases, research in this vein references a “communications ecosystem” (e.g., Peace, Goodstadt, & Agarwal, 2011). In other cases, the notion of a “media ecosystem” is employed (Napoli, et al., 2012). In still others, phrases such as “news ecosystem” (e.g., Pew Research Center, 2010) or “journalism ecosystem” (e.g., Lewis, 2010) are used.

The innermost circle represents the news ecosystem. This is the ecosystem oriented around the reporting of current events; and is thus comprised of the individuals and organizations engaged in these activities, across all of the interconnected platforms they utilize for doing so. It is important to recognize that the notion of news represents something subtly but significantly different from the notion 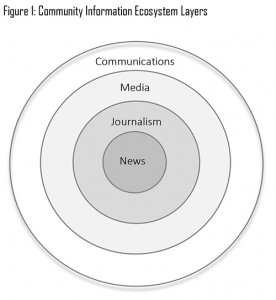 of journalism (the next concentric circle). As Clarke (2014) notes, “while ‘journalism’ and ‘news’ are often used interchangeably . . . the two terms should not ordinarily be conflated” (p. 18). As Clarke (2014) and others argue, news is best thought of as a subcategory of journalism. The former is focused on the reporting of current events; while the latter is more broadly focused, to also encompass content types such as current affairs, documentaries, commentary, and analysis.
As should be clear, then, the notion of a news ecosystem is nested within a larger journalism ecosystem. Of course, the notion of what constitutes journalism is certainly amidst a process of revision; one in which traditional, narrow perceptions of how, where, and by whom journalism is produced are necessarily being revised (e.g., Fico, et al., 2013; Shapiro, 2014; Williams & Delli Carpini, 2011). However, there is comparative stability in terms of what might be considered “acts of journalism” (Stearns, 2013). Regardless of how or by whom produced, the parameters of journalistic output can still be fairly explicitly defined. Thomas Kent of the Associated Press (cited in Stearns, 2013) has offered an explicit set of criteria for what constitutes journalism, in the form of seven questions. These are:

This set of questions is instructive in that it helps to illustrate a set of parameters via which journalism can be defined and distinguished from other types of informational content that may be available. In this way, the journalistic ecosystem can be articulated as something distinct within a defined community.

The analytical scope broadens further at the media ecosystem layer. This layer contains both the journalism and news ecosystem, but also accounts for the content and associated providers that extend beyond the boundaries of journalism. This might include, for instance, cultural or entertainment content delivered via various media platforms. Or it might include content that is more instructive/informational in nature, such as that from a library or a transit authority, rather than meeting the criteria of news or journalism per se. And so once again, the analytical framework broadens to include additional individuals or organizations whose outputs meet these more expansive criteria.

Further, via the media terminology, the technologies involved in the production, dissemination, and consumption of content (such as journalism) become integrated into the analytical framework a bit more explicitly. As Adam (2008) argues, “the term ‘media’ pushes technology into the foreground and conceals the fact that ‘journalism’ is one thing and ‘media’ is another. The latter refers mainly to technologies of various effects and uses” (p. 1). Clearly, then, the notions of the journalism and media ecosystems should not be considered synonymous; and thus they are represented as separate analytical layers in our model, with the journalism ecosystem nested within the broader media ecosystem.

Within the context of this schema, the present analysis focuses on the journalism ecosystem. We recognize that an approach that focuses on journalism omits a range of important sources of information in a community (e.g., libraries, local government web sites). However, given the extent to which this analysis is motivated by concerns regarding the health of local journalism, given the technological and economic changes that have potentially affected its viability (see above), it is these concerns that have served as the basis for delineating the analytical focus.